The Earth Beneath our Feet

100,000 years ago, the East Riding of Yorkshire looked totally different than it does today.  The mouth of the River Humber was sited around the Hessle Foreshore area and the coastline itself went from Sewerby through the Yorkshire and Lincolnshire Wolds, all the way down to Hessle.  Hull and Holderness did not exist at all.  The Humber flowed along basically the same watercourse as it does today, but it’s possible that instead of (or as well as) joining the North Sea it merged with other rivers and lakes on the vast land bridge called Doggerland, which then connected Britain with mainland Europe.  The sea level was about 420 ft lower than it is today as most of the water was trapped in vast northern ice glaciers, which gradually advanced south to Britain over thousands of years, through the ebb and flow of ice ages.

Around 50,000 years ago in the grip of the last Ice Age, Britain was covered with massive ice sheets up to three miles high, stretching from Scotland all the way down to East Yorkshire and beyond.

The mouth of the Humber was blocked and water pooled backwards to form rivers and lakes including Lake Humber, a part of which is now the nature reserve Humberhead Peatlands near Goole.  When the ice came, Britain’s sparse human and animal population migrated downward to the warmer and more habitable Doggerland. 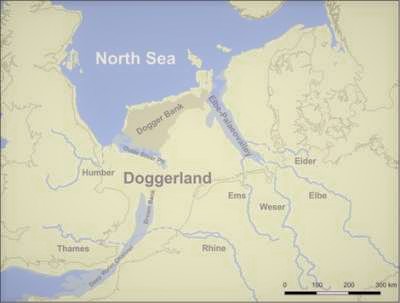 “… roughly 12,000 years ago, as the last major ice age was reaching its end, the area was very different.  Instead of the North Sea, the area was a series of gently sloping hills, marshland, heavily wooded valleys, and swampy lagoons: Doggerland.

Mesolithic people populated Doggerland.  They were hunter-gatherers who migrated with the seasons, fishing, hunting, and gathering food such as hazelnuts and berries.”

National Geographic Society – Doggerland, The Europe that Was

15,000 to 10,000 years ago, ice began to thaw and Britain was gradually brought back to life.  Melting ice gave rise to great swathes of marshland, lakes and meres, of which Hornsea Mere still survives.  It also shaped our rolling hills and flat lands as the thick, heavy ice pushed and pulled the earth towards its present state. The colossal glaciers of Holderness gradually melted and left behind 20 to 50 metre thick boulder clay, sand and gravel that it had picked up along the way.  The land beneath our feet in Hull and Holderness was formed on the reclaimed salt marshes, clay and alluvium, thousands of years later.  The coastline was around 12 miles further out than it is presently, but the following centuries of tides pummelled the coastline further and further back to its ever receding state as it is today.

This is a (very!) rough sketch of the East Riding drawn aptly in chalk, which shows why there are chalk cliffs at Little Switzerland, Hessle and sprawling ancient cliffs at Flamborough, Bridlington and Sewerby.

Excellent fossils have been discovered over the years along the Holderness coast, of animals and flora that were deposited there from the vast sheets of ice that once sprawled over the area, collected along the way thousands of years ago, and from the remnants of land that once stood firm, now lost to the sea.

Standing on the beach at North Landing, Flamborough, beside the white chalk cliff you can clearly see the lines of the centuries, and an interesting streak of flint running right through at around shoulder level.

Homo sapiens have occupied Britain for hundreds of thousands of years with a fluctuating population depending upon the temperature and availability of food. 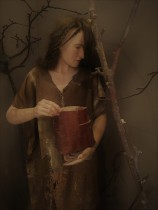 Mesolithic men and women (10,000 to 8,000 BC) initially were nomadic hunter gatherers on the great plains and forests of northern England.  Hyena, lions, auroch, giant deer and woolly mammoths shared the land with them.  Some of these, like the auroch (wild cow), mammoth and deer would have been hunted and killed for their meat, skin, fur, horns and bones, but we were just as likely to be preyed upon by hungry carnivores, such as lions and hyenas.

Children as young as four years old would have been trained for adulthood by contributing to daily life with tasks such as gathering wood and berries, helping to prepare food, and keeping the living spaces tidy.  As they grew up they would have been taught how to hunt, kill and skin animals using flint spear heads and axes, and then shown how to prepare the skins and furs for clothing, watching as their elders made clothes, sacks and water carriers.  They would have watched the older members make and repair their houses with wood, stone, flint, reeds and mosses, and would have learnt how make fire, used for cooking, heat and light during the cold nights of Northern Britain.

Harsh terrain, being hunted by ferocious beasts, not to mention the encroaching colder climates would have been testing to say the least, and they would have done what they had to do in order to survive.  Which wasn’t very long, as the average life expectancy in the Stone Age was around 26 years old.

Evidence of Mesolithic life was discovered at Round Hill, Skipsea, in the early 1900’s, followed up by the Humber Wetlands Project in 1992.  Finds included wooden piles, a human skull, pottery, a circular mace-head, an amber bead and jet bracelet.

Star Carr up near Scarborough has evidence of Mesolithic life from around 9000 BC.  This site is of massive historical significance, bearing the decayed bones of the ‘first house in Britain’.  They found twenty one incredibly rare red deer skull ritual head-dresses, 200 antler harpoon points, a pit of animal bones including deer, wild boar, auroch, hare, badger, birds and even the remains of wolf, thought to be one of the earliest examples of domesticated dogs in Britain.  There was also evidence of pioneering land manipulation for their advantage by the burning of reeds to promote re-growth, and discoveries of the first use of carpentry in Europe, with worked planks of aspen and willow creating track ways over the boggy land between their camp and Lake Flixton.  The site is thought to have been lived at for generations, either as a hunting base or tribal home, again making it unusual for the era we think of as nomadic.  The red deer skulls were smoothed out inside and holes bored through so as to be worn as masks, perhaps used in shamanic rituals around a great fire or lake to appease the ancient Gods.